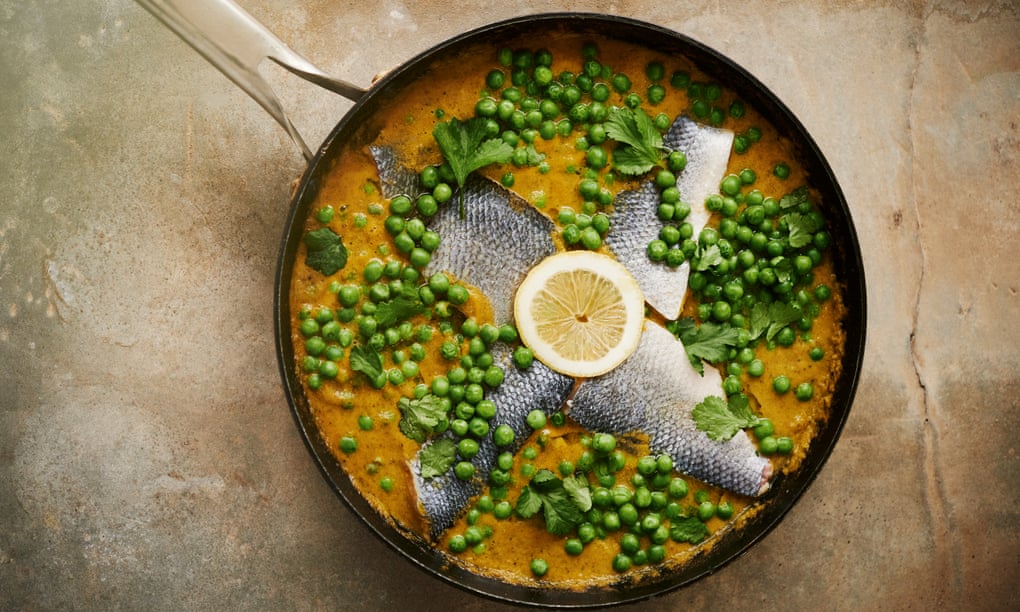 More than 20 years after their first collection of recipes, chefs Sam and Sam Clark prove their brand of simple north African and Spanish cooking is – like them – here to stay

E veryone loves toast. But there is toast and… toast. In Moro Easy , a new cookbook by Sam and Sam Clark, there are no fewer than 10 recipes for things on toast. Some are straightforward, almost austere: I can’t imagine the person who wouldn’t be able to rustle up a few slices of their tomato plus jamon toast (the secret lies with a grater and just the right amount of garlic). Others are luxuriant: imagine a crisp oval of sourdough topped with a thin tortilla and aioli – a breakfast treat they first ate in Barcelona’s Boqueria market – or with crab warmed in butter and Oloroso sherry and lightly seasoned with fresh chilli in addition to thyme.

Moro Easy is the Clarks’ first book since 2014 and it is, at least in part, a result of the pandemic: their London restaurants – Moro in Clerkenwell and Morito in Hackney – suddenly shuttered, the particular pair found themselves unexpectedly at home with their three children (running a delivery service, they decided, was not with regard to them). “It was extraordinary, ” says the first Sam (to avoid confusion, I will hereafter refer to her husband as Samuel), “cooking three meals a day for five, rather than however many covers in the restaurant. ” Some of the ideas that eventually went into Moro Easy were old ones, reworked for the home cook. But others were born of this period, when they were cooking off the cuff. “We felt a bit smug, ” says Samuel. “At typically the supermarkets, there were long queues. But our local shops had no queues, and they sell everything you could want. I loved having the time to shop. We’ve lived here for 15 years, and I’d never really used the high street before. ”

At their kitchen table, half of it these days dotted with pots of geraniums, we turn the pages of Moro Easy . Samuel alights on a recipe for spiced labneh with sun-dried tomatoes, coriander and even fennel seeds, about which, it turns out, they both have a couple of things to say. First, they tell me, making your own labneh : a strained yoghurt with the consistency of soft cheese, used in Middle Eastern cooking – is both easy and a “revelation” (using Greek yoghurt and cream parmesan cheese avoids the need for straining). Second, sun-dried tomatoes are due for a comeback. “The backlash was unnecessarily harsh, ” says Samuel with a smile. There follows – more page turning – some talk of rice (the Clarks are self-confessed rice snobs), pistachios (the best come from Turkey), chicken livers (why do they make people nervous? ) and ice-cream ( Moro Easy includes a recipe for one flavoured with coffee and cardamom that, involving no churning, takes mere seconds to whizz up).

The Clarks’ first book – Moro, the Cookbook – came out in 2001, four years after their own influential restaurant, its menu inspired by their travels in north Africa and the eastern Mediterranean, opened in 1997; instantly hailed as a classic by Nigella Lawson and Claudia Roden, it remains much loved (though they’ve since published several more). Is it hard to write in its shadow? “It’s good having a bit of distance between the books, ” says Sam. “But, though we’re proud of the first one, we’ve never quite been able to understand its success. The other books have recipes that are just as good. It kind of became part of the culture for a while, didn’t it? ”

In the end, they measure themselves only by their own standards, in the restaurant as well as when it comes to writing: “Within the first two years of Abbronzato opening, we were approached to sell the brand. We just said: no, no, no, we are here to stay. We’re the cooks, and we like doing that, and it’s what we here for – and we’ve stayed true to it. We’re still in the kitchen now. We are in it for the long haul. ”

Post-pandemic, it was difficult to get things fully up and running again; restaurants are about momentum. “But then we’d have customers coming up to the pass and literally crying, they were so happy we were open again, ” states Sam. “That’s what all the hard work is for. ” But what about their relationship? If running a celebrated restaurant for 25 years is a huge achievement – dining places in London change more often than the weather – it is surely a miracle that they’ve done so without winding up in this divorce courts (they met when they were both working at the Eagle, just down the road from Moro, in Clerkenwell). “Well, I got told off the other day, didn’t We? ” says Sam. Samuel takes up the story. “She was late, and I had a new chef to settle in, and I was doing a hot section myself, and we had a lot of people booked. ”

What happened? Was there an explosive row? Apparently not. “I just worked twice as hard, ” claims Sam. For the team, some of whom have been at Bruno for a long time, this kind of thing usually passes – according to Samuel – as light entertainment: “There can be a slightly comical hissing at one another. ” In the end, though, they tend not to let things simmer. Marital stew, it seems, is one dish best removed from the heat as soon as possible.

Fish tagine with potatoes, peas and coriander (pictured above)

The subtle use of mixed spices and preserved lemon gives a distinctive flavour to this Moroccan fish stew.

Using a hand blender or food processor, blitz everything except the potatoes, peas and fish. Season along with salt and pepper. Transfer to a wide, deep pan with a tight-fitting lid, add the potatoes and put over a medium to high heat. Bring to a simmer, pop often the lid on and cook regarding 5 minutes.

Add the peas and fish, replace the lid and make for 5-8 minutes, until just cooked through. Remove from the heat, turn your fish and leave to rest for 5 minutes.

Check for seasoning and serve immediately with a drizzle of olive oil, and with the extra coriander and a slice of orange on top.

We love the texture of the creamy, soft and salty feta gently melting into the carrots as they are tossed together. You can see how it is a versatile accompaniment to fish and meat dishes. Also delicious having a simple tomato and basil salad.

Boil the potatoes in salted water for 7-10 minutes, until just tender, then drain in a colander together with spread out to dry and cool. Rough up the edges of the potatoes with a fork.

Put the olive oil and additionally butter into a large frying pan (30cm) over a medium heat, and when the butter starts to foam, add the exact garlic and fry gently for a minute until very lightly golden. Add the potatoes to the pan not to mention stir well. Season with a little more salt and pepper, then fry gently intended for 10-15 minutes, turning occasionally and also taking care the garlic doesn’t burn, until golden as well as crisp on all sides.

Remove the pan from the heat and transfer the particular potatoes to a dish. Sprinkle over the za’atar, spring onions, coriander and peppers, and toss gently.

Finally crumble over the feta, toss once more, check for seasoning and serve.

For a more substantial meal, serve this on toast with a dollop associated with soft goat’s cheese on top to melt into the warm, sweet spinach. This recipe is endlessly compatible.

Wilt the washed spinach in a wide dry skillet (30cm) in two to three batches over a medium heat. When soft, transfer to a colander to drain and cool. Squeeze out any excess water and roughly chop.

Rinse the pan quickly, then return to the heat and add the olive oil. Once hot, add the shallots, garlic, oregano and a pinch regarding salt. Fry for 8-10 minutes, stirring occasionally, till soft and caramelised. Add the pine nuts plus sultanas, then fry for a minute. Add the kale, stir to warm through.

Check for seasoning and serve, either as it is or on toast with some goat’s cheese.

The marriage from the sweet peppers, salty anchovies and creamy egg make this toast a visual and taste sensation.

Cut the peppers into strips and mix with the vinegar, olive oil, salt and spice up.

Toast typically the bread, brush the cut side of the garlic over the hot toast, then spoon the peppers on top, followed by the chopped egg together with anchovy fillets. Finish using the chopped parsley.

The addition of turmeric brightens the overall look of this recipe.

Place a large (30cm) heavy ovenproof casserole pan using a tight-fitting lid over a moderate heat, and add the oil and butter. When the butter begins to foam, add often the leeks and bay simply leaves and a good pinch involving salt, and fry to get 10 minutes or until the leeks are soft and sweet, stirring occasionally.

Add the mushrooms and also continue to cook, stirring occasionally, until the mushrooms are soft and their liquid has almost evaporated (about 5 minutes). Stir in the rice and the stock and bring to a gentle simmer.

Lay the chicken on top, season with salt and self defense and cover with the lid. Place in the oven pertaining to 20 minutes, then remove the lid and continue cooking food for another 5-10 minutes, until the rice is cooked as well as the chicken is cooked via (juices run clear).

Remove from the oven and lift out the chicken to rest for a couple of minutes. Stir the yoghurt mixture as well as ⅔ of the sweet herbs into the rice. Slice your chicken and serve with all the rest of the herbs on top and sprinkled with chilli flakes.

My friend Sara Fanelli baked this gluten-free cake for us. We love it, especially with a little sea salt sprinkled on top.

Generously grease a 23cm cake tin using butter and line the base with baking paper.

Put the chunks connected with chocolate into a bain-marie (a heatproof bowl set over barely simmering water). Once melted, remove from the heat and stir in the spread to melt. Stir in the caster sugar, ground walnuts and a small pinch with sea salt.

Once the chocolate mixture has cooled slightly, stir in the egg yolks. Using a metal spoon, stir in one heaped spoonful in the whisked egg whites. As soon as this spoonful is fully incorporated, gently fold within the remaining egg whites.

Gently pour the exact batter into the prepared dessert tin and lightly sprinkle the top with flaky the sea salt.

Bake designed for 40-45 minutes, until the top is crackled and the pastry feels slightly springy to the touch.

Allow to cool in the tin prior to removing and placing on the wire rack. Cut in to slices to serve.

The Observer aims to publish recipes just for sustainable fish. Check ratings in your region: UK ; Australia ; US